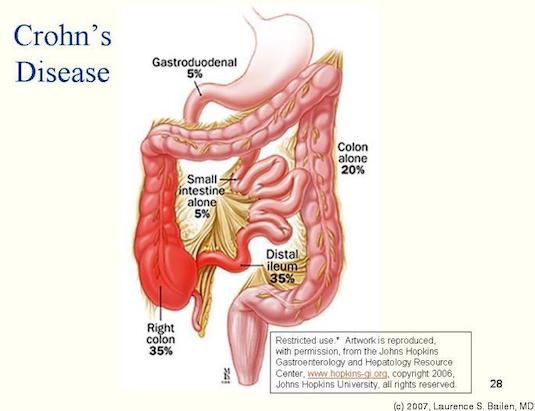 What is Crohn’s disease?

Crohn’s disease is an ongoing disorder that causes inflammation of the digestive tract, also referred to as the gastrointestinal (GI) tract. Crohn’s disease can affect any area of the GI tract, from the mouth to the anus, but it most commonly affects the lower part of the small intestine, called the ileum. The swelling extends deep into the lining of the affected organ. The swelling can cause pain and can make the intestines empty frequently, resulting in diarrhea.

Crohn’s disease is an inflammatory bowel disease, the general name for diseases that cause swelling in the intestines. Because the symptoms of Crohn’s disease are similar to other intestinal disorders, such as irritable bowel syndrome and ulcerative colitis, it can be difficult to diagnose. Ulcerative colitis causes inflammation and ulcers in the top layer of the lining of the large intestine. In Crohn’s disease, all layers of the intestine may be involved, and normal healthy bowel can be found between sections of diseased bowel.

Crohn’s disease may also be called ileitis or enteritis.

Several theories exist about what causes Crohn’s disease, but none have been proven. The human immune system is made from cells and different proteins that protect people from infection. The most popular theory is that the body’s immune system reacts abnormally in people with Crohn’s disease, mistaking bacteria, foods, and other substances for being foreign. The immune system’s response is to attack these “invaders.” During this process, white blood cells accumulate in the lining of the intestines, producing chronic inflammation, which leads to ulcerations and bowel injury.

What are the symptoms?

The most common symptoms of Crohn’s disease are abdominal pain, often in the lower right area, and diarrhea. Rectal bleeding, weight loss, arthritis, skin problems, and fever may also occur. Bleeding may be serious and persistent, leading to anemia. Children with Crohn’s disease may suffer delayed development and stunted growth. The range and severity of symptoms varies.

How is Crohn’s disease diagnosed?

The doctor may do an upper GI series to look at the small intestine. For this test, the person drinks barium, a chalky solution that coats the lining of the small intestine, before x rays are taken. The barium shows up white on x-ray film, revealing inflammation or other abnormalities in the intestine. If these tests show Crohn’s disease, more x rays of both the upper and lower digestive tract may be necessary to see how much of the GI tract is affected by the disease.

What are the complications of Crohn’s disease?

The most common complication is blockage of the intestine. Blockage occurs because the disease tends to thicken the intestinal wall with swelling and scar tissue, narrowing the passage. Crohn’s disease may also cause sores, or ulcers, that tunnel through the affected area into surrounding tissues, such as the bladder, vagina, or skin. The areas around the anus and rectum are often involved. The tunnels, called fistulas, are a common complication and often become infected. Sometimes fistulas can be treated with medicine, but in some cases they may require surgery. In addition to fistulas, small tears called fissures may develop in the lining of the mucus membrane of the anus.

Nutritional complications are common in Crohn’s disease. Deficiencies of proteins, calories, and vitamins are well documented. These deficiencies may be caused by inadequate dietary intake, intestinal loss of protein, or poor absorption, also referred to as malabsorption.

Other complications associated with Crohn’s disease include arthritis, skin problems, inflammation in the eyes or mouth, kidney stones, gallstones, or other diseases of the liver and biliary system. Some of these problems resolve during treatment for disease in the digestive system, but some must be treated separately.

What is the treatment for Crohn’s disease?

Treatment may include drugs, nutrition supplements, surgery, or a combination of these options. The goals of treatment are to control inflammation, correct nutritional deficiencies, and relieve symptoms like abdominal pain, diarrhea, and rectal bleeding. At this time, treatment can help control the disease by lowering the number of times a person experiences a recurrence, but there is no cure. Treatment for Crohn’s disease depends on the location and severity of disease, complications, and the person’s response to previous medical treatments when treated for recurring symptoms.

Some people have long periods of remission, sometimes years, when they are free of symptoms. However, the disease usually recurs at various times over a person’s lifetime. This changing pattern of the disease means one cannot always tell when a treatment has helped. Predicting when a remission may occur or when symptoms will return is not possible.

Someone with Crohn’s disease may need medical care for a long time, with regular doctor visits to monitor the condition.

The doctor may recommend nutritional supplements, especially for children whose growth has been slowed. Special high-calorie liquid formulas are sometimes used for this purpose. A small number of patients may need to be fed intravenously for a brief time through a small tube inserted into the vein of the arm. This procedure can help patients who need extra nutrition temporarily, those whose intestines need to rest, or those whose intestines cannot absorb enough nutrition from food. There are no known foods that cause Crohn’s disease. However, when people are suffering a flare in disease, foods such as bulky grains, hot spices, alcohol, and milk products may increase diarrhea and cramping.

Two-thirds to three-quarters of patients with Crohn’s disease will require surgery at some point in their lives. Surgery becomes necessary when medications can no longer control symptoms. Surgery is used either to relieve symptoms that do not respond to medical therapy or to correct complications such as blockage, perforation, abscess, or bleeding in the intestine. Surgery to remove part of the intestine can help people with Crohn’s disease, but it is not a cure. Surgery does not eliminate the disease, and it is not uncommon for people with Crohn’s Disease to have more than one operation, as inflammation tends to return to the area next to where the diseased intestine was removed.

Some people who have Crohn’s disease in the large intestine need to have their entire colon removed in an operation called a colectomy. A small opening is made in the front of the abdominal wall, and the tip of the ileum, which is located at the end of the small intestine, is brought to the skin’s surface. This opening, called a stoma, is where waste exits the body. The stoma is about the size of a quarter and is usually located in the right lower part of the abdomen near the beltline. A pouch is worn over the opening to collect waste, and the patient empties the pouch as needed. The majority of colectomy patients go on to live normal, active lives.

Because Crohn’s disease often recurs after surgery, people considering it should carefully weigh its benefits and risks compared with other treatments. Surgery may not be appropriate for everyone. People faced with this decision should get as much information as possible from doctors, nurses who work with colon surgery patients (enterostomal therapists), and other patients. Patient advocacy organizations can suggest support groups and other information resources. (See For More Information for the names of such organizations.)

People with Crohn’s disease often experience a decrease in appetite, which can affect their ability to receive the daily nutrition needed for good health and healing. In addition, Crohn’s disease is associated with diarrhea and poor absorption of necessary nutrients. No special diet has been proven effective for preventing or treating Crohn’s disease, but it is very important that people who have Crohn’s disease follow a nutritious diet and avoid any foods that seem to worsen symptoms. There are no consistent dietary rules to follow that will improve a person’s symptoms.

People should take vitamin supplements only on their doctor’s advice.

There is no evidence showing that stress causes Crohn’s disease. However, people with Crohn’s disease sometimes feel increased stress in their lives from having to live with a chronic illness. Some people with Crohn’s disease also report that they experience a flare in disease when they are experiencing a stressful event or situation. There is no type of person that is more likely to experience a flare in disease than another when under stress. For people who find there is a connection between their stress level and a worsening of their symptoms, using relaxation techniques, such as slow breathing, and taking special care to eat well and get enough sleep, may help them feel better.

Is pregnancy safe for women with Crohn’s disease?

The above information comes from The National Institute of Diabetes and Digestive and Kidney Diseases (NIDDK), a part of the National Institutes of Health (NIH) and the U.S. Department of Health and Human specialties. To ensure that you’re viewing the most up-to-date information, we recommend visiting the Crohn’s disease entry at the NIDDK website.