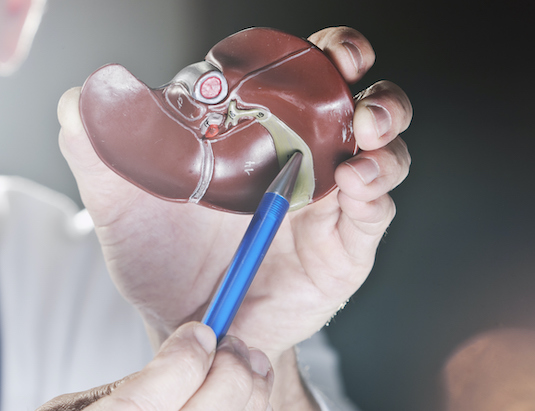 The two types of gallstones are cholesterol stones and pigment stones. Cholesterol stones are usually yellow-green and are made primarily of hardened cholesterol. They account for about 80 percent of gallstones. Pigment stones are small, dark stones made of bilirubin. Gallstones can be as small as a grain of sand or as large as a golf ball. The gallbladder can develop just one large stone, hundreds of tiny stones, or a combination of the two.

The gallbladder and the ducts that carry bile and other digestive enzymes from the liver, gallbladder, and pancreas to the small intestine are called the biliary system.

Gallstones can block the normal flow of bile if they move from the gallbladder and lodge in any of the ducts that carry bile from the liver to the small intestine. The ducts include the:

Bile trapped in these ducts can cause inflammation in the gallbladder, the ducts, or in rare cases, the liver. Other ducts open into the common bile duct, including the pancreatic duct, which carries digestive enzymes out of the pancreas. Sometimes gallstones passing through the common bile duct provoke inflammation in the pancreas — called gallstone pancreatitis — an extremely painful and potentially dangerous condition.

If any of the bile ducts remain blocked for a significant period of time, severe damage or infection can occur in the gallbladder, liver, or pancreas. Left untreated, the condition can be fatal. Warning signs of a serious problem are fever, jaundice, and persistent pain.

Scientists believe cholesterol stones form when bile contains too much cholesterol, too much bilirubin, or not enough bile salts, or when the gallbladder does not empty completely or often enough. The reason these imbalances occur is not known.

The cause of pigment stones is not fully understood. The stones tend to develop in people who have liver cirrhosis, biliary tract infections, or hereditary blood disorders — such as sickle cell anemia — in which the liver makes too much bilirubin.

The mere presence of gallstones may cause more gallstones to develop. Other factors that contribute to the formation of gallstones, particularly cholesterol stones, include:

Who is at risk for gallstones?

People at risk for gallstones include:

What are the symptoms of gallstones?

As gallstones move into the bile ducts and create blockage, pressure increases in the gallbladder and one or more symptoms may occur. Symptoms of blocked bile ducts are often called a gallbladder “attack” because they occur suddenly. Gallbladder attacks often follow fatty meals, and they may occur during the night. A typical attack can cause:

Notify your doctor if you think you have experienced a gallbladder attack. Although these attacks often pass as gallstones move, your gallbladder can become infected and rupture if a blockage remains.

People with any of the following symptoms should see a doctor immediately:

Many people with gallstones have no symptoms; these gallstones are called “silent stones.” They do not interfere with gallbladder, liver, or pancreas function and do not need treatment.

How are gallstones diagnosed?

How are gallstones treated?

If you have gallstones without symptoms, you do not require treatment. If you are having frequent gallbladder attacks, your doctor will likely recommend you have your gallbladder removed — an operation called a cholecystectomy. Surgery to remove the gallbladder — a nonessential organ — is one of the most common surgeries performed on adults in the United States.

Nearly all cholecystectomies are performed with laparoscopy. After giving you medication to sedate you, the surgeon makes several tiny incisions in the abdomen and inserts a laparoscope and a miniature video camera. The camera sends a magnified image from inside the body to a video monitor, giving the surgeon a close-up view of the organs and tissues. While watching the monitor, the surgeon uses the instruments to carefully separate the gallbladder from the liver, bile ducts, and other structures. Then the surgeon cuts the cystic duct and removes the gallbladder through one of the small incisions.

Recovery after laparoscopic surgery usually involves only one night in the hospital, and normal activity can be resumed after a few days at home. Because the abdominal muscles are not cut during laparoscopic surgery, patients have less pain and fewer complications than after “open” surgery, which requires a 5- to 8-inch incision across the abdomen.

The most common complication in gallbladder surgery is injury to the bile ducts. An injured common bile duct can leak bile and cause a painful and potentially dangerous infection. Mild injuries can sometimes be treated nonsurgically. Major injury, however, is more serious and requires additional surgery.

If gallstones are present in the bile ducts, the physician — usually a gastroenterologist — may use ERCP to locate and remove them before or during gallbladder surgery. Occasionally, a person who has had a cholecystectomy is diagnosed with a gallstone in the bile ducts weeks, months, or even years after the surgery. The ERCP procedure is usually successful in removing the stone in these cases.
Because gallstone symptoms may be similar to those of a heart attack, appendicitis, ulcers, irritable bowel syndrome, hiatal hernia, pancreatitis, and hepatitis, an accurate diagnosis is important.

Nonsurgical approaches are used only in special situations — such as when a patient has a serious medical condition preventing surgery — and only for cholesterol stones. Stones commonly recur within 5 years in patients treated non-surgically.

Oral dissolution therapy. Drugs made from bile acid are used to dissolve gallstones. The drugs ursodiol (Actigall) and chenodiol (Chenix) work best for small cholesterol stones. Months or years of treatment may be necessary before all the stones dissolve. Both drugs may cause mild diarrhea, and chenodiol may temporarily raise levels of blood cholesterol and the liver enzyme transaminase.

Contact dissolution therapy. This experimental procedure involves injecting a drug directly into the gallbladder to dissolve cholesterol stones. The drug — methyl tert-butyl ether — can dissolve some stones in 1 to 3 days, but it causes irritation and some complications have been reported. The procedure is being tested in symptomatic patients with small stones.

Do people need their gallbladder?

Fortunately, the gallbladder is an organ people can live without. Your liver produces enough bile to digest a normal diet. Once the gallbladder is removed, bile flows out of the liver through the hepatic ducts into the common bile duct and directly into the small intestine, instead of being stored in the gallbladder. Because now the bile flows into the small intestine more often, softer and more frequent stools can occur in about 1 percent of people. These changes are usually temporary, but talk with your health care provider if they persist.

Animal research has helped identify several genes that may determine which people are more prone to gallstones. In spite of many well-defined risk factors for gallstones, researchers continue to look for genes that may identify susceptibility in humans. Researchers also believe that the growing global epidemic of obesity may increase rates of gallbladder disease worldwide.