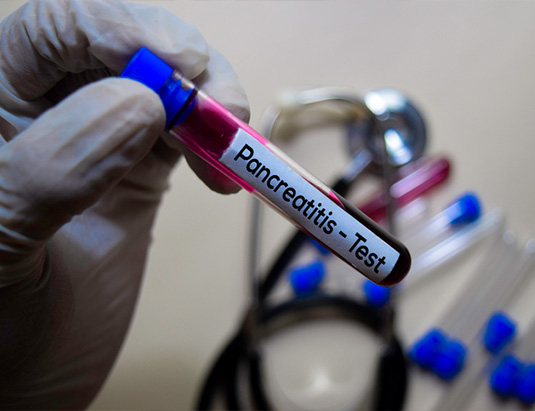 Pancreatitis is inflammation of the pancreas. The pancreas is a large gland behind the stomach and close to the duodenum — the first part of the small intestine. The pancreas secretes digestive juices, or enzymes, into the duodenum through a tube called the pancreatic duct. Pancreatic enzymes join with bile — a liquid produced in the liver and stored in the gallbladder — to digest food. The pancreas also releases the hormones insulin and glucagon into the bloodstream. These hormones help the body regulate the glucose it takes from food for energy.

Normally, digestive enzymes secreted by the pancreas do not become active until they reach the small intestine. But when the pancreas is inflamed, the enzymes inside it attack and damage the tissues that produce them. Pancreatitis can be acute or chronic. Either form is serious and can lead to complications. In severe cases, bleeding, infection, and permanent tissue damage may occur.

The gallbladder and the ducts that carry bile and other digestive enzymes from the liver, gallbladder, and pancreas to the small intestine are called the biliary system.

Both forms of pancreatitis occur more often in men than women.

What is acute pancreatitis?

Acute pancreatitis usually begins with gradual or sudden pain in the upper abdomen that sometimes extends through the back. The pain may be mild at first and feel worse after eating. But the pain is often severe and may become constant and last for several days. A person with acute pancreatitis usually looks and feels very ill and needs immediate medical attention. Other symptoms may include:

Severe acute pancreatitis may cause dehydration and low blood pressure. The heart, lungs, or kidneys can fail. If bleeding occurs in the pancreas, shock and even death may follow.

While asking about a person’s medical history and conducting a thorough physical examination, the doctor will order a blood test to assist in the diagnosis. During acute pancreatitis, the blood contains at least three times the normal amount of amylase and lipase, digestive enzymes formed in the pancreas. Changes may also occur in other body chemicals such as glucose, calcium, magnesium, sodium, potassium, and bicarbonate. After the person’s condition improves, the levels usually return to normal.

Diagnosing acute pancreatitis is often difficult because of the deep location of the pancreas. The doctor will likely order one or more of the following tests:

Treatment for acute pancreatitis requires a few days’ stay in the hospital for intravenous (IV) fluids, antibiotics, and medication to relieve pain. The person cannot eat or drink so the pancreas can rest. If vomiting occurs, a tube may be placed through the nose and into the stomach to remove fluid and air.

Unless complications arise, acute pancreatitis usually resolves in a few days. In severe cases, the person may require nasogastric feeding — a special liquid given in a long, thin tube inserted through the nose and throat and into the stomach — for several weeks while the pancreas heals.

Before leaving the hospital, the person will be advised not to smoke, drink alcoholic beverages, or eat fatty meals. In some cases, the cause of the pancreatitis is clear, but in others, more tests are needed after the person is discharged and the pancreas is healed.

ERCP is a specialized technique used to view the pancreas, gallbladder, and bile ducts and treat complications of acute and chronic pancreatitis — gallstones, narrowing or blockage of the pancreatic duct or bile ducts, leaks in the bile ducts, and pseudocysts — accumulations of fluid and tissue debris.

Soon after a person is admitted to the hospital with suspected narrowing of the pancreatic duct or bile ducts, a physician with specialized training performs ERCP.

After lightly sedating the patient and giving medication to numb the throat, the doctor inserts an endoscope — a long, flexible, lighted tube with a camera — through the mouth, throat, and stomach into the small intestine. The endoscope is connected to a computer and screen. The doctor guides the endoscope and injects a special dye into the pancreatic or bile ducts that helps the pancreas, gallbladder, and bile ducts appear on the screen while x rays are taken.

The following procedures can be performed using ERCP:

Gallstones that cause acute pancreatitis require surgical removal of the stones and the gallbladder. If the pancreatitis is mild, gallbladder removal — called cholecystectomy — may proceed while the person is in the hospital. If the pancreatitis is severe, gallstones may be removed using therapeutic endoscopic retrograde cholangiopancreatography (ERCP) — a specialized technique used to view the pancreas, gallbladder, and bile ducts and treat complications of acute and chronic pancreatitis. Cholecystectomy is delayed for a month or more to allow for full recovery. For more information, see the Gallstones fact sheet from the National Institute of Diabetes and Digestive and Kidney Diseases (NIDDK).

If an infection develops, ERCP or surgery may be needed to drain the infected area, also called an abscess. Exploratory surgery may also be necessary to find the source of any bleeding, to rule out conditions that resemble pancreatitis, or to remove severely damaged pancreatic tissue.

Pseudocysts — accumulations of fluid and tissue debris — that may develop in the pancreas can be drained using ERCP or EUS. If pseudocysts are left untreated, enzymes and toxins can enter the bloodstream and affect the heart, lungs, kidneys, or other organs.

In rare cases, acute pancreatitis can cause breathing problems. Hypoxia, a condition that occurs when body cells and tissues do not get enough oxygen, can develop. Doctors treat hypoxia by giving oxygen to the patient. Some people still experience lung failure — even with oxygen — and require a respirator for a while to help them breathe.

What is chronic pancreatitis?

The most common cause of chronic pancreatitis is many years of heavy alcohol use. The chronic form of pancreatitis can be triggered by one acute attack that damages the pancreatic duct. The damaged duct causes the pancreas to become inflamed. Scar tissue develops and the pancreas is slowly destroyed.

Other causes of chronic pancreatitis are:

Most people with chronic pancreatitis experience upper abdominal pain, although some people have no pain at all. The pain may spread to the back, feel worse when eating or drinking, and become constant and disabling. In some cases, abdominal pain goes away as the condition worsens, most likely because the pancreas is no longer making digestive enzymes. Other symptoms include:

People with chronic pancreatitis often lose weight, even when their appetite and eating habits are normal. The weight loss occurs because the body does not secrete enough pancreatic enzymes to digest food, so nutrients are not absorbed normally. Poor digestion leads to malnutrition due to excretion of fat in the stool.

In more advanced stages of pancreatitis, when malabsorption and diabetes can occur, the doctor may order blood, urine, and stool tests to help diagnose chronic pancreatitis and monitor its progression.

After ordering x rays of the abdomen, the doctor will conduct one or more of the tests used to diagnose acute pancreatitis — abdominal ultrasound, CT scan, EUS, and MRCP.

Treatment for chronic pancreatitis may require hospitalization for pain management, IV hydration, and nutritional support. Nasogastric feedings may be necessary for several weeks if the person continues to lose weight.

When a normal diet is resumed, the doctor may prescribe synthetic pancreatic enzymes if the pancreas does not secrete enough of its own. The enzymes should be taken with every meal to help the person digest food and regain some weight. The next step is to plan a nutritious diet that is low in fat and includes small, frequent meals. A dietitian can assist in developing a meal plan. Drinking plenty of fluids and limiting caffeinated beverages is also important.

People with chronic pancreatitis are strongly advised not to smoke or consume alcoholic beverages, even if the pancreatitis is mild or in the early stages.

People with chronic pancreatitis who continue to consume large amounts of alcohol may develop sudden bouts of severe abdominal pain.

In cases involving persistent pain, surgery or other procedures are sometimes recommended to block the nerves in the abdominal area that cause pain.

When pancreatic tissue is destroyed in chronic pancreatitis and the insulin-producing cells of the pancreas, called beta cells, have been damaged, diabetes may develop. People with a family history of diabetes are more likely to develop the disease. If diabetes occurs, insulin or other medicines are needed to keep blood glucose at normal levels. A health care provider works with the patient to develop a regimen of medication, diet, and frequent blood glucose monitoring.

How common is pancreatitis in children?

The following information comes from The National Institute of Diabetes and Digestive and Kidney Diseases (NIDDK), a part of the National Institutes of Health (NIH) and the U.S. Department of Health and Human specialties. To ensure that you’re viewing the most up-to-date information, we recommend visiting the pancreatitis entry at the NIDDK website.