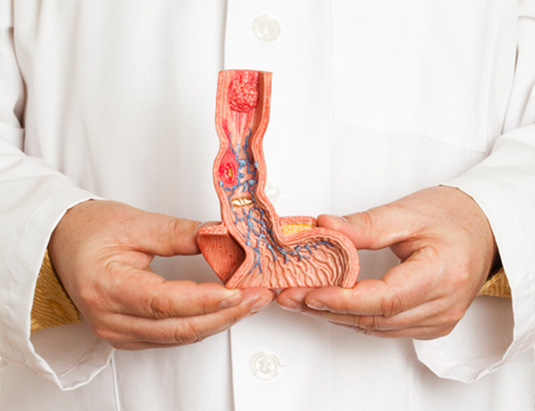 What is Barrett’s esophagus?

The esophagus carries food and liquids from the mouth to the stomach. The stomach slowly pumps the food and liquids into the intestine, which then absorbs needed nutrients. This process is automatic and people are usually not aware of it. People sometimes feel their esophagus when they swallow something too large, try to eat too quickly, or drink very hot or cold liquids.  The muscular layers of the esophagus are normally pinched together at both the upper and lower ends by muscles called sphincters. When a person swallows, the sphincters relax to allow food or drink to pass from the mouth into the stomach. The muscles then close rapidly to prevent the food or drink from leaking out of the stomach back into the esophagus and mouth.

What is gastroesophageal reflux disease (GERD)?

GERD is a more serious form of gastroesophageal reflux (GER). GER occurs when the lower esophageal sphincter opens spontaneously for varying periods of time or does not close properly and stomach contents rise into the esophagus. GER is also called acid reflux or acid regurgitation because digestive juices called acids rise with the food or fluid.

When GER occurs, food or fluid can be tasted in the back of the mouth. When refluxed stomach acid touches the lining of the esophagus it may cause a burning sensation in the chest or throat called heartburn or acid indigestion. Occasional GER is common and does not necessarily mean one has GERD.

Persistent reflux that occurs more than twice a week is considered GERD and can eventually lead to more serious health problems. Overall, 10 to 20 percent2 of Americans experience GERD symptoms every day, making it one of the most common medical conditions. People of all ages can have GERD.  GERD symptoms are often relieved by over-the-counter, acid-reducing agents called antacids. Common antacids include:

Other drugs used to relieve GERD symptoms are anti-secretory drugs such as H2 blockers and proton pump inhibitors. Common H2 blockers are:

People who have GERD symptoms should consult with a physician. If GERD is left untreated over a long period of time, it can lead to complications such as a bleeding ulcer. Scars from tissue damage can lead to strictures — narrowed areas of the esophagus — that make swallowing difficult. GERD may also cause hoarseness, chronic cough, and conditions such as asthma.

Since Barrett’s esophagus is more commonly seen in people with GERD, most physicians recommend treating GERD symptoms with acid-reducing drugs.

Improvement in GERD symptoms may lower the risk of developing Barrett’s esophagus. A surgical procedure may be recommended if medications are not effective in treating GERD.

How is Barrett’s esophagus diagnosed?

Because Barrett’s esophagus does not cause any symptoms, many physicians recommend that adults older than 40 who have had GERD for a number of years undergo an endoscopy and biopsies to check for the condition.

Barrett’s esophagus can only be diagnosed using an upper gastrointestinal (GI) endoscopy to obtain biopsies of the esophagus. In an upper GI endoscopy, after the patient is sedated, the doctor inserts a flexible tube called an endoscope, which has a light and a miniature camera, into the esophagus. If the tissue appears suspicious, the doctor removes several small pieces using a pincher-like device that is passed through the endoscope. A pathologist examines the tissue with a microscope to determine the diagnosis.

What is the risk of esophageal cancer with Barrett’s esophagus?

Surveillance for Dysplasia and Cancer

Periodic endoscopic examinations with biopsies to look for early warning signs of cancer are generally recommended for people who have Barrett’s esophagus. This approach is called surveillance.

Typically, before esophageal cancer develops, precancerous cells appear in the Barrett’s tissue. This condition is called dysplasia and can be seen only through biopsies. Multiple biopsies must be taken because dysplasia can be missed in a single biopsy. Detecting and treating dysplasia may prevent cancer from developing.

How is Barrett’s esophagus with dysplasia or cancer treated?

Endoscopic or surgical treatments can be used to treat Barrett’s esophagus with severe dysplasia or cancer. Your doctor will present the available options and help determine the best course of treatment for you.

Several endoscopic therapies are available to treat severe dysplasia and cancer. During these therapies, the Barrett’s lining is destroyed or the portion of the lining that has dysplasia or cancer is cut out. The goal of the treatment is to encourage normal esophageal tissue to replace the destroyed Barrett’s lining. Endoscopic therapies are performed at specialty centers by physicians with expertise in these procedures.

Surgical removal of most of the esophagus is recommended if a person with Barrett’s esophagus is found to have severe dysplasia or cancer and can tolerate a surgical procedure. Many people with Barrett’s esophagus are older and have other medical problems that make surgery unwise; in these people, the less-invasive endoscopic treatments would be considered. Surgery soon after diagnosis of severe dysplasia or cancer may provide a person with the best chance for a cure. The type of surgery varies, but it usually involves removing most of the esophagus, pulling a portion of the stomach up into the chest, and attaching it to what remains of the esophagus.

The National Institute for Diabetes and Digestive and Kidney Diseases and the National Cancer Institute sponsor research programs to investigate Barrett’s esophagus and esophageal adenocarcinoma.

Further research into Barrett’s esophagus is needed, including:

Participants in clinical trials can play a more active role in their own health care, gain access to new research treatments before they are widely available, and help others by contributing to medical research. For information about current studies, visit www.ClinicalTrials.gov.