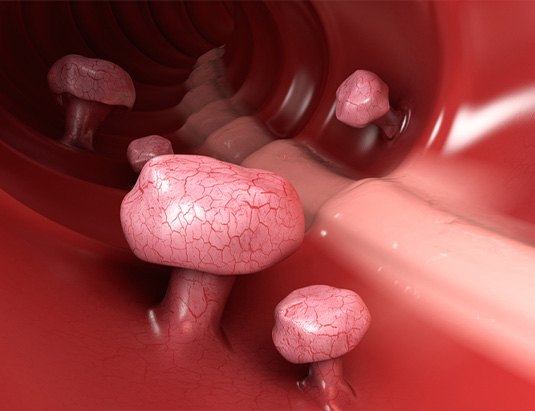 What are colon polyps?

A colon polyp is a growth on the surface of the colon, also called the large intestine. Sometimes, a person can have more than one colon polyp. Colon polyps can be raised or flat.

The large intestine is the long, hollow tube at the end of your digestive tract. The large intestine absorbs water from stool and changes it from a liquid to a solid. Stool is the waste that passes through the rectum and anus as a bowel movement.

Some colon polyps are benign, which means they are not cancer. But some types of polyps may already be cancer or can become cancer. Flat polyps can be smaller and harder to see and are more likely to be cancer than raised polyps. Polyps can usually be removed during colonoscopy — the test used to check for colon polyps.

Who gets colon polyps?

Anyone can get colon polyps, but certain people are more likely to get them than others. You may have a greater chance of getting polyps if:

You may also be more likely to get colon polyps if you:

What are the symptoms of colon polyps?

Most people with colon polyps do not have symptoms. Often, people don’t know they have one until the doctor finds it during a regular checkup or while testing for something else.

But some people do have symptoms, such as

If you have any of these symptoms, see a doctor to find out what the problem is.

How does the doctor test for colon polyps?

The doctor can use one or more tests to check for colon polyps.

Who should get tested for colon polyps?

Talk with your doctor about getting tested for colon polyps if you’re 50 years of age or older, or earlier if you have symptoms or someone in your family has had polyps or colon cancer.

How are colon polyps treated?

In most cases, the doctor removes colon polyps during sigmoidoscopy or colonoscopy. The polyps are then tested for cancer.

If you’ve had colon polyps, the doctor will want you to get tested regularly in the future.

How can I prevent colon polyps?

Doctors don’t know of one sure way to prevent colon polyps. But you might be able to lower your risk of getting them if you:

Eating more calcium may also lower your risk of getting polyps. Some foods that are rich in calcium are milk, cheese, yogurt, and broccoli.

Taking a low dose of aspirin every day might help prevent polyps. Talk with your doctor before starting any medication.

The following information comes from The National Institute of Diabetes and Digestive and Kidney Diseases (NIDDK), a part of the National Institutes of Health (NIH) and the U.S. Department of Health and Human specialties. To ensure that you’re viewing the most up-to-date information, we recommend visiting the colon polyps entry at the NIDDK website.