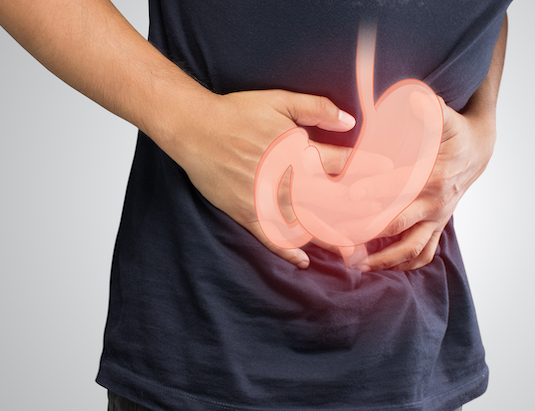 The most common cause of gastroparesis is diabetes. People with diabetes have high blood glucose, also called blood sugar, which in turn causes chemical changes in nerves and damages the blood vessels that carry oxygen and nutrients to the nerves. Over time, high blood glucose can damage the vagus nerve.

Some other causes of gastroparesis are:

Many people have what is called idiopathic gastroparesis, meaning the cause is unknown and cannot be found even after medical tests.

What are the symptoms of gastroparesis?

Signs and symptoms of gastroparesis are

Eating solid foods, high-fiber foods such as raw fruits and vegetables, fatty foods, or drinks high in fat or carbonation may contribute to these symptoms.

The symptoms of gastroparesis may be mild or severe, depending on the person. Symptoms can happen frequently in some people and less often in others. Many people with gastroparesis experience a wide range of symptoms, and sometimes the disorder is difficult for the physician to diagnose.

What are the complications of gastroparesis?

If food lingers too long in the stomach, it can cause bacterial overgrowth from the fermentation of food. Also, the food can harden into solid masses called bezoars that may cause nausea, vomiting, and obstruction in the stomach. Bezoars can be dangerous if they block the passage of food into the small intestine.

How is gastroparesis diagnosed?

After performing a full physical exam and taking your medical history, your doctor may order several blood tests to check blood counts and chemical and electrolyte levels. To rule out an obstruction or other conditions, the doctor may perform the following tests:

Once other causes have been ruled out, the doctor will perform one of the following gastric emptying tests to confirm a diagnosis of gastroparesis.

How is gastroparesis treated?

Treatment of gastroparesis depends on the severity of the symptoms. In most cases, treatment does not cure gastroparesis — it is usually a chronic condition. Treatment helps you manage the condition so you can be as healthy and comfortable as possible.

Several medications are used to treat gastroparesis. Your doctor may try different medications or combinations to find the most effective treatment. Discussing the risk of side effects of any medication with your doctor is important.

Changing your eating habits can help control gastroparesis. Your doctor or dietitian may prescribe six small meals a day instead of three large ones. If less food enters the stomach each time you eat, it may not become overly full. In more severe cases, a liquid or pureed diet may be prescribed.

The doctor may recommend that you avoid high-fat and high-fiber foods. Fat naturally slows digestion — a problem you do not need if you have gastroparesis — and fiber is difficult to digest. Some high-fiber foods like oranges and broccoli contain material that cannot be digested. Avoid these foods because the indigestible part will remain in the stomach too long and possibly form bezoars.

If a liquid or pureed diet does not work, you may need surgery to insert a feeding tube. The tube, called a jejunostomy, is inserted through the skin on your abdomen into the small intestine. The feeding tube bypasses the stomach and places nutrients and medication directly into the small intestine. These products are then digested and delivered to your bloodstream quickly. You will receive special liquid food to use with the tube. The jejunostomy is used only when gastroparesis is severe or the tube is necessary to stabilize blood glucose levels in people with diabetes.

Parenteral nutrition refers to delivering nutrients directly into the bloodstream, bypassing the digestive system. The doctor places a thin tube called a catheter in a chest vein, leaving an opening to it outside the skin. For feeding, you attach a bag containing liquid nutrients or medication to the catheter. The fluid enters your bloodstream through the vein. Your doctor will tell you what type of liquid nutrition to use.

This approach is an alternative to the jejunostomy tube and is usually a temporary method to get you through a difficult period with gastroparesis. Parenteral nutrition is used only when gastroparesis is severe and is not helped by other methods.

A gastric neurostimulator is a surgically implanted battery-operated device that releases mild electrical pulses to help control nausea and vomiting associated with gastroparesis. This option is available to people whose nausea and vomiting do not improve with medications. Further studies will help determine who will benefit most from this procedure, which is available in a few centers across the United States.

The use of botulinum toxin has been associated with improvement in symptoms of gastroparesis in some patients; however, further research on this form of therapy is needed.

What if I have diabetes and gastroparesis?

The doctor will suggest dietary changes such as six smaller meals to help restore your blood glucose to more normal levels before testing you for gastroparesis. In some cases, the doctor or dietitian may suggest you try eating several liquid or pureed meals a day until your blood glucose levels are stable and the symptoms improve. Liquid meals provide all the nutrients found in solid foods, but can pass through the stomach more easily and quickly.

If you have gastroparesis, food is being absorbed more slowly and at unpredictable times. To control blood glucose, you may need to:

Your doctor will give you specific instructions for taking insulin based on your particular needs.

The following information comes from The National Institute of Diabetes and Digestive and Kidney Diseases (NIDDK), a part of the National Institutes of Health (NIH) and the U.S. Department of Health and Human specialties. To ensure that you’re viewing the most up-to-date information, we recommend visiting the gastroparesis entry at the NIDDK website.