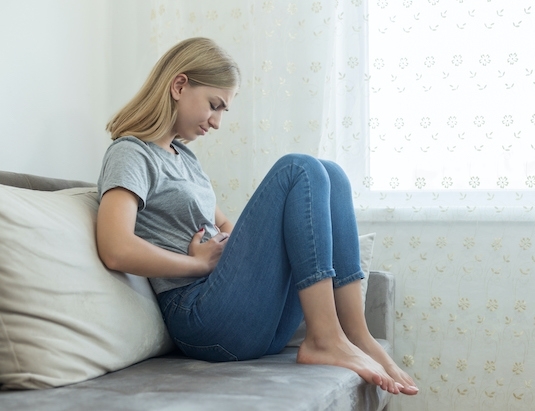 What is a peptic ulcer?

A peptic ulcer is a sore on the lining of the stomach or duodenum, which is the beginning of the small intestine. Peptic ulcers are common: One in 10 Americans develops an ulcer at some time in his or her life. One cause of peptic ulcer is bacterial infection, but some ulcers are caused by long-term use of nonsteroidal anti-inflammatory agents (NSAIDs), like aspirin and ibuprofen. In a few cases, cancerous tumors in the stomach or pancreas can cause ulcers. Peptic ulcers are not caused by stress or eating spicy food, but these can make ulcers worse.

What is H. pylori?

Helicobacter pylori (H. pylori) is a type of bacteria. Researchers believe that H. pylori is responsible for the majority of peptic ulcers.

H. pylori infection is common in the United States. About 20 percent of people under 40 years old and half of those over 60 years have it. Most infected people, however, do not develop ulcers. Why H. pylori does not cause ulcers in every infected person is not known. Most likely, infection depends on characteristics of the infected person, the type of H. pylori, and other factors yet to be discovered.

Researchers are not certain how people contract H. pylori, but they think it may be through food or water. Researchers have found H. pylori in the saliva of some infected people, so the bacteria may also spread through mouth-to-mouth contact such as kissing.

How does H. pylori cause a peptic ulcer?

H. pylori weakens the protective mucous coating of the stomach and duodenum, which allows acid to get through to the sensitive lining beneath. Both the acid and the bacteria irritate the lining and cause a sore, or ulcer.

H. pylori is able to survive in stomach acid because it secretes enzymes that neutralize the acid. This mechanism allows H. pylori to make its way to the “safe” area — the protective mucous lining. Once there, the bacterium’s spiral shape helps it burrow through the lining.

What are the symptoms of an ulcer?

Abdominal discomfort is the most common symptom. This discomfort usually:

Some people experience only very mild symptoms, or none at all.

If you have any of these symptoms, call your doctor right away:

They could be signs of a serious problem, such as:

How is an H. pylori-related ulcer diagnosed?

To see whether symptoms are caused by an ulcer, the doctor may do an upper gastrointestinal (GI) series or an endoscopy. An upper GI series is an x ray of the esophagus, stomach, and duodenum. The patient drinks a chalky liquid called barium to make these organs and any ulcers show up more clearly on the x ray.

An endoscopy is an exam that uses an endoscope, a thin, lighted tube with a tiny camera on the end. The patient is lightly sedated, and the doctor carefully eases the endoscope into the mouth and down the throat to the stomach and duodenum. This allows the doctor to see the lining of the esophagus, stomach, and duodenum. The doctor can use the endoscope to take photos of ulcers or remove a tiny piece of tissue to view under a microscope. This procedure is called a biopsy. If an ulcer is bleeding, the doctor can use the endoscope to inject drugs that promote clotting or to guide a heat probe that cauterizes the ulcer.

H. pylori is diagnosed through blood, breath, stool, and tissue tests. Blood tests are most common. They detect antibodies to H. pylori bacteria. Blood is taken at the doctor’s office through a finger stick.

Urea breath tests are an effective diagnostic method for H. pylori. They are also used after treatment to see whether it worked. In the doctor’s office, the patient drinks a urea solution that contains a special carbon atom. If H. pylori is present, it breaks down the urea, releasing the carbon. The blood carries the carbon to the lungs, where the patient exhales it. The breath test is 96 percent to 98 percent accurate.

Stool tests may be used to detect H. pylori infection in the patient’s fecal matter. Studies have shown that this test, called the Helicobacter pylori stool antigen (HpSA) test, is accurate for diagnosing H. pylori.

Tissue tests are usually done using the biopsy sample that is removed with the endoscope. There are three types:

In diagnosing H. pylori, blood, breath, and stool tests are often done before tissue tests because they are less invasive. However, blood tests are not used to detect H. pylori following treatment because a patient’s blood can show positive results even after H. pylori has been eliminated.

H. pylori peptic ulcers are treated with drugs that kill the bacteria, reduce stomach acid, and protect the stomach lining. Antibiotics are used to kill the bacteria. Two types of acid-suppressing drugs might be used: H2 blockers and proton pump inhibitors.

H2 blockers work by blocking histamine, which stimulates acid secretion. They help reduce ulcer pain after a few weeks. Proton pump inhibitors suppress acid production by halting the mechanism that pumps the acid into the stomach. H2 blockers and proton pump inhibitors have been prescribed alone for years as treatments for ulcers. But used alone, these drugs do not eradicate H. pylori and therefore do not cure H. pylori-related ulcers. Bismuth subsalicylate, a component of Pepto-Bismol, is used to protect the stomach lining from acid. It also kills H. pylori. Treatment usually involves a combination of antibiotics, acid suppressors, and stomach protectors. Antibiotic regimens recommended for patients may differ across regions of the world because different areas have begun to show resistance to particular antibiotics.

The use of only one medication to treat H. pylori is not recommended. At this time, the most proven effective treatment is a 2-week course of treatment called triple therapy. It involves taking two antibiotics to kill the bacteria and either an acid suppressor or stomach-lining shield. Two-week triple therapy reduces ulcer symptoms, kills the bacteria, and prevents ulcer recurrence in more than 90 percent of patients.

Unfortunately, patients may find triple therapy complicated because it involves taking as many as 20 pills a day. Also, the antibiotics used in triple therapy may cause mild side effects such as nausea, vomiting, diarrhea, dark stools, metallic taste in the mouth, dizziness, headache, and yeast infections in women — most side effects can be treated with medication withdrawal. Nevertheless, recent studies show that 2 weeks of triple therapy is ideal. Early results of studies in other countries suggest that 1 week of triple therapy may be as effective as the 2-week therapy, with fewer side effects.

Another option is 2 weeks of dual therapy. Dual therapy involves two drugs: an antibiotic and an acid suppressor. It is not as effective as triple therapy.

Can H. pylori infection be prevented?

No one knows for sure how H. pylori spreads, so prevention is difficult. Researchers are trying to develop a vaccine to prevent infection.

Why don’t all doctors automatically check for H. pylori?

Since H. pylori was discovered in 1982, studies conducted around the world have shown that using antibiotics to destroy H. pylori cures peptic ulcers. The prevalence of H. pylori ulcers is changing. The infection is becoming less common in people born in developed countries. The medical community, however, continues to debate H. pylori‘s role in peptic ulcers. If you have a peptic ulcer and have not been tested for H. pylori infection, talk to your doctor.